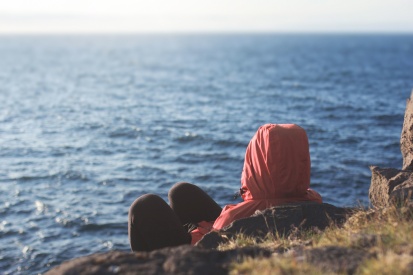 One of piece of advice I have heard or read over and over from published authors and aspiring-to-publish writers is in order to be good you must write every day. Some set themselves a word count that they must meet daily, others set a time limit such as two hours or six hours, but they all write daily. This, it seems, is what successful writers do in order to be successful. This is why I have always hesitated in calling myself a writer because I don’t write every day. I remember my dad telling me that one of our favorite authors, Ralph McInerny, would write every night from 11pm-1pm. He was a professor of Philosophy at Notre Dame by day, but late at night he wrote magazine articles and fiction most notably the Father Dowling Mysteries and the Notre Dame Mysteries collections. My favorite work of fiction he wrote was a stand alone, The Red Hat.  The Interwebs are filled with writers and interviews with female authors who arise in the wee hours of the morning to write for a few hours before the rest of the house awakens. Sometimes they have day jobs – they are wives, mothers, home educators, and, and, and, the list goes on. They often get up at ridiculous hours to create. I wish I were one of these dedicated individuals, but I have never been a morning person. I was so spoiled when my husband was alive because most days he did the morning routine with the kids. I am just not very competent between the hours of 11 p.m. and 9 a.m. Beyond the difficulty with fitting a writing regimen in to the time I have available when I am actually coherent, I just can’t write for the sake of writing. It is probably a tendency toward perfectionism though my writing is far from perfect.

Last fall I endeavored to participate in National Novel Writing Month or NaNoWriMo. The idea is you write 50K words in a month and have a complete or nearly complete first draft of a novel. This means writing 1667 words per day or at least averaging around that number. I made it eight days and 10K words before I decided I could not go on. The idea of writing every single day to make a word count, writing whatever came into my head whether the sentences made sense or not, finally got the better of me. I.can.not.write.that.way. I have sometimes taken a challenge to blog every day for seven days, but then I go into a writing coma for several weeks. No, I have to do things my way. I write in my head.

When I was a little girl, my dad worked as a copywriter for a big ad agency in NYC and once a year or so, he’d bring me into the office with him for a day. He had an office with a window that looked out on I don’t know what, and he had this really cool art director in the office next door who had every color magic marker in existence. “Uncle Fi” would give me a huge pad of paper and let me have my pick of markers, then I would settle down on the floor of my dad’s office and do my thing while my dad did his thing. Near as I could tell back then it amounted to drinking at least 12 cups of coffee and staring out his window for most of the day. I decided I wanted a job like his when I grew up. Well, I never got a job like his, I don’t care for coffee, but I do sit and ponder out the window for long periods of time. I write in my head. I wrote most of this blog post in my head over the last five days. When I sit down to the computer, I can’t stare at a blank document and write from nothing but maybe a small idea. I can’t even pick up the thread of a story without first ruminating on it for hours, days, weeks or in some cases, years. The children’s story I am currently hoping to publish has been “in the making” for 12 years. You read that right, 12 years. I thought about the story for a few months then ripped out a first draft in four hours. Then I didn’t do another thing with it for two years. I pulled it out again. Removed sentences, added paragraphs, changed characters, then away it went again. A year or so later I dusted it off briefly, submitted it to publishers, and received rejection letters, and I let it sit again for years until I once again edited it and came up with the version I have today. I was fortunate enough to have an editor critique it at a recent conference I attended, and finally, with his small suggestions, I have something worth shopping around again. My point of this rambling is that although my book would sit untouched for a long time, sometimes years, I was always pondering it in my head. It was always a part of me, even when I began new writing projects. Sometimes ideas for stories pop into my dreams. I am too lazy to actually get out of bed to write them down, and I don’t want to put my light on because I have insomnia problems and turning a light on will wake me up completely and make me grumpy but not creatively productive. Most of the time I intentionally make the ideas push to my conscious mind, or as I have recently discovered the beauty of voice memos on my phone so I don’t risk losing the inspiration. Don’t you love technology? You can write a story in your half awake, half asleep state of being, and never have to actually get up from the supine position. It makes writing in my head a whole lot easier.

How do you write? Are you highly regimented, somewhat disciplined, or highly erratic like I am?

One thought on “Writing In My Head”